In Canada, the former Prime Minister Trudeau, father of the current prime minister, famously said, “The State has no place in the bedrooms of the nation.”

And now we find ourselves in a situation where legislators dabble in washroom usage. This may appeal to one small, vocal corner of their support, but it’s not good for business.

Here’s a link to a current update on the situation:

Meeting planners and the hospitality sector, which is one of the largest and fastest growing industries in the world, are not helped by such intrusive legislation. Planners already live by the maxim: plan for the best, but expect the worst.

Now a new disaster category has been created by politicians whose local laws conflict with the values and beliefs of non-partisan organizations and businesses.

Someone with first-hand experience is Dr. Barbara Risman. A professor at the University of Illinois in Chicago, Risman was president of the Virginia-based Southern Sociological Society (SSS) when she cancelled her 1,200-person meeting scheduled for 2019 in Charlotte, North Carolina. 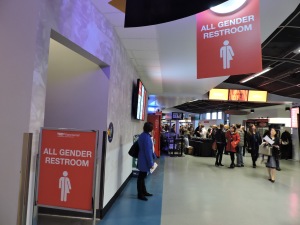 Under neutral washrooms at the Rogers Centre in Vancouver for the TEDx Talks.

into law of HB2, the so-called “bathroom bill”. The bill passed on March 23, Risman send a note on the 24th and formal letter on the 25th. She says the SSS were able to act as swiftly as they did because, “We have faced this before. There was a discriminatory bill in the Louisiana legislature the year before.” It came before the legislature while the SSS were meeting in New Orleans. “That governor did not sign the bill. But when that came up, we as an organization, and the executive committee voted, not to meet in a state that passes discriminatory laws against LGBT people. So the moment HB2 passed in North Carolina I contacted the hotel. We had, because of our experiences with Louisiana’s almost law, put a discrimination clause in our contract with The Westin, which says we have the right to cancel without penalty if the state passes a law that discriminated against LGBT people or same-sex marriage. So I was ready to go.”

The Westin’s sales manager told The Charlotte Observer the cancellation was a $180,000 loss to the hotel.

Georgia, a state the SSS meets in every four years, had considered similar discriminatory legislation. The frustration for Risman is that “We are the Southern Sociological Society. That means we meet in the South. That’s where all these backlash laws are happening. So if it (legislation) is going to be a problem for anybody, it’s going to be a problem for groups that are Southerners.”

Legislators, who are normally deeply in the “pro business” column, seem oblivious to the real, measurable negative economic impact of their decisions. In addition to the professional groups who opt out of doing business in such states, sporting events have been moved out of state and private sector businesses cancelled announced expansions and moved their investments elsewhere.

Given the frequency and range of disruptors taking place the Global Business Travel Association (GBTA) developed a Travel Risk Management Assessment Tool for the industry.

Monica Sanchez, GTBA’s Director of Research, says risk management “is a pretty broad term. When we ask about the travel management programs some have a very sophisticated program where they have a third party company manage the program. Others say they have some sort of program in place because they have policies or processes (but no one to manage it). We found that a good 20 percent don’t (have a plan) and they still send people out to travel and don’t really have a clear vision of risk management. That’s why our traveler’s program is for them.”

The GBTA’s assessment tools, says Sanchez, “go through everything from the risk assessment itself, risk mitigation, risk disclosure to how to communicate everything in the program, to data management for how data is gathered. So all in all there are 10 key performance areas that we’re gathering information about.”

The purpose of the tool is to pinpoint gaps in plans and procedures and guide planners to solutions. One thing the tool doesn’t do is rate destinations on the basis of risk. Sanchez says, “There’s no information or questions in the assessment that are specific to a region. What the assessment is going to do is identify the things they already have in place and gaps that they have. So when they have gaps there are a set of recommendations where we tell them maybe you don’t have x in place, you should contact this sort of person in order to find out what the next steps are. With those recommendations they can determine the risk there could be for a destination, but nowhere would we recommend or not recommend going to a destination.”

The tool also doesn’t differentiate between the type of disruption. Whether a natural disaster, terrorism, health concern or other, it’s about preparedness.

“I think the risks have always been there and sometimes they are more in evidence because obviously of the news and the social media,” says Colleen Gallagher, the GBTA’s Communications Director. “It’s not only terrorism, there is also other issues that we have to be aware of, like environmental issues to political instability in other regions. Our industry is a global industry. We’re not just sending travelers around the corner, but to places they may have never been. We’re sending someone across borders, so we should make sure where the travellers are, make sure we give them the right information so they don’t get into trouble, and if they do they know how to contact us.”

To understand the impact of these disruptions Roger Dow, CEO and President of the U.S. Travel Association, says, “We commissioned a study quite a while ago to look at what was the loss from something like Katrina. So Oxford Economics found it literally took New Orleans five years to recover from Katrina. And we found most of the times, if there is a big-scale disruption – a monstrous fire, flood, major hurricane, something like that – it’s 26 months to five years for recovery. Business doesn’t just snap right back. It has to do with several things. One is the infrastructure damage, but much more important is perceptual damage.”

The gulf oil spill was another prompt for the study. Dow says, “We were trying to demonstrate to BP that you just don’t have a hurricane Katrina and after the wind and rain stops the next week everything is back to normal. What ends up happening is people start changing their travel patterns. They go to different places for vacation” and business rotation is altered. People will remember the event, but not know of the recovery. “So any time you have a disaster, whether it’s political or nature, it takes a long time for the travel industry to come back.”

Beyond the immediate impact of events to local populations and places, Dow believes reputation damage or concern is fed and amplified by the proliferation of social media as well as the 24-hour news cycle. Events that were once local stories have become national and international stories that play on a type of continuous loop.

And when the disaster is politically motivated, legislators must ask themselves if it is truly worth the dollar, job and reputational loss.